History of the College

In 1993, the District Superior of the Society of St Pius X in Australia, Rev. Fr François Laisney, purchased 16 acres of land in Tynong for the development of a Traditional Catholic school. Originally the intention was to have a primary school. A school in rural Victoria was in fact a central location to the majority of families who attended the Hampton Church, Melbourne, and had school age children. The land was quickly paid off and the dream of a school was not too far in the distant future.

March 7th, 1996 saw the acquisition of ex-Government school buildings and these were moved from Greythorn to Tynong. Eight classrooms, a library and an administration block were moved and some of these remain on an adjacent paddock to the school in skeleton form.

By January 28th, 1997 we had our beginning. Some of the buildings from Greythorn were in place, bricked in and looking brilliant. The asphalt was laid the morning of the opening. The opening ceremony was a memorable occasion with 40 students, 7 teachers on staff, parents and many parishioners present; the then District Superior, Rev. Fr Jean Violette, opened the school and blessed all the rooms. Father Angele, an American priest, was our first Principal. It is thanks to his hard work that the project of the building of the school reached perfect completion.

This college is now co-institutional (boys and girls from Preparatory to Year 12) and offers a wonderful learning environment for the students. Located in a semi-rural area seventy-six kilometres from the centre of Melbourne, it caters for a student population drawn from a wide geographical area. Situated on Tynong Rd, the college is well serviced by public transport.

St Thomas Aquinas College seeks the very best for its students by striving to develop within them a strong character, based upon the timeless teachings of the Catholic Church whose supreme law is the salvation of souls.

The school develops this character by fostering a profound knowledge of our culture and a deep taste for studies in an atmosphere of discipline motivated by fraternal charity. A spirit of academic excellence will equip the students to become valuable members of the Church and the society in which they live. Their joy will be to serve the community, following the example of the Divine Master: “The Son of Man is not come to be ministered unto, but to minister” (Matthew 20: 28).

By these means the school is committed to assisting the parents in their work of education which is nothing else than preparing their children to be serious and responsible adults. 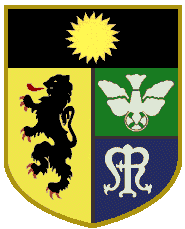 Explanation of the College Crest

The lion rampant on a gold field is taken from the Coat of Arms of Archbishop Marcel Lefebvre, founder of the Society of Saint Pius X.

The Holy Ghost, giver of Wisdom, is depicted on a green field, green being the colour of Hope.

On a field of royal blue is the monogram of the Blessed Virgin Mary. The letters of the name Maria are evident in this ancient symbol.

Explanation of the College Flag

The yellow represents the immortal glory of Heaven which will one day be ours, but it is overlaid by the sufferings and sacrifices of this world (signified by the black and red crosses) which must first be passed through.

The Holy Ghost and our Lady (represented by the dove and the blue stars respectively) together produce a wonderful fruitfulness, that is, firstly, the Fruit, Our Lord Jesus Christ and His most efficacious work of our Redemption and, thereafter, all Christians in whom Jesus Christ lives, miniature Christs. This fruitfulness which is, in itself, a sign of life, is signified by the green oval.

The design of the dove is taken from the Vatican stained-glass window, and serves as a reminder of our Romanitas.

Explanation of the College Moto

The College motto is: Honor Excellentiae Debetur (Honour is owed to excellence). This phrase is taken from Saint Thomas Aquinas’ luminous work, “The Summa Theologica” (IIa Ilae, Q 142, a4, c).

St Thomas Aquinas College acknowledges that we are on the traditional land of the Bunurong and Wurundjeri people. We recognise their continued connection to the land and waters of this beautiful place created by Almighty God and respectfully pray for their elders past, present and emerging as custodians of His bountiful creation.